"I am an adoptive mother of one Ethiopian-born girl. I also am a writer with a passionate belief that in order for our planet to survive, all children, everywhere, need to be provided with the opportunity to go to school. In a utopian world, all children would remain with their families of origin and receive an education through college, if this was their desire. But the current state of the planet being what it is -- with commerce and acquisition taking priority over education and environmental protection -- often, especially in Africa and Asia, this means governments providing assistance for their country's children through international adoption.

I love my daughter. I love her birth country and the people of Ethiopia. I love my daughter's birth mother for possessing the courage and faith to trust that the baby she gave life to would have opportunities she could not provide, opportunities that would impart a level of health, safety, and education her child would need to thrive in this often very challenging world. Our daughter's first mother handed her infant to somebody who most likely promised her that the American couple who would become the baby's parents would be able to give her a better life.

The things that I discovered after the fact, so to speak, about our daughter's background are enough to make even the strongest woman crumble. Though other Ethiopian adoption "stories" I have heard are surely more heart breaking than ours, whenever a child is presented to potential future parents with assurance that they are being given all of the available "facts," only to find out weeks, months, or years after the adoption is final, that little of the truth was actually disclosed, well...

We used a small agency to assist us in the delivery of our daughter. I described our adoption process "ordeal" in my book, Finding Aster -- Our Ethiopian Adoption Story. (Names throughout the book were changed.) In the Epilogue, written August 2010, I predicted a little bit of what eventually happened with Ethiopian adoption procedures the following March, 2011. A mother's intuition, a journalist's inner eye, or whatever; I knew there was not a chance in this crazy world that we were the only ones to suffer from American adoption agencies not telling adoptive parents all that they knew, or could know with a little bit of leg work. Something in the system would surely have to change.

For a while, adoptions slowed to nearly a halt. Policies were given an overhaul. Unfortunately, this turned out to be for the better. Why unfortunately? One: because now children would remain institutionalized far longer than necessary; or, far longer than necessary if transparency, honesty, and the children's best interests were top priority. Two: because now adoption agencies would work even harder to hide what they knew, or could know, in order to quicken the process and promise potential adoptive parents unrealistic wait times. Money being a motivating factor in the business of international adoption, the children, it seems, often end up becoming a mere commodity, with no regard to the fallout of lying to one human being, about another human being's background, existence, and/or circumstances.

Though my words here may seem vague, in the end I write to share the truth. I write with the intention to bring light into dark places and hope where there may be despair. Many adoptive parents, birth parents, and adopted children, too many, really, have suffered as a result of various agencies lying about the adoptive children's social history. Everybody ends up losing this game of deceit that only one party agreed to play.

Many adoptive mothers of Ethiopian-born children "chat" in private online venues and express strong desires to see heads of adoption agencies imprisoned. We mothers continue to feel angry and saddened every time a new story further illustrates what sometimes transpires to get a child out of Africa."
Eingestellt von HL um 22:45 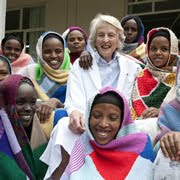